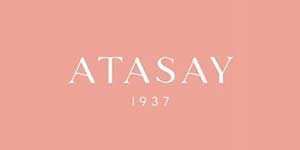 The origins of Atasay Jewlery date back to the development of the Turkish republic, specifically in 1937 in Turkey’s province Denizli. Atasay’s journey started when Atasay Kamer rented its first store in Istanbul Grand Bazaar, known as the oldest shopping center in the world. Atasay with its commercial intelligence and innovative approach has become the first jewelry brand to transform from workshop scale to large industry. Having been in the jewelry sector for four generations, Atasay expanded into Anatolia and then to the world. Over the years, Atasay became the biggest Turkish retail brand in the jewelry sector. With the transition to the franchise system, Atasay began to grow rapidly, and opened many stores globally. With its strong franchise network, Atasay always has its finger on the pulse of what consumers want. Today with over 160 domestic stores and 24 international stores located in premium shopping malls and on prestigious streets, Atasay is a strong, leading and winning retail brand. Atasay accelerated its international business by opening stores in the United Arab Emirates, Iraq, Qatar and in Germany, ranking among the biggest Turkish jewelry brands of the region. With its timeless and contemporary designs Atasay graced 110 million women around the world and appeals to a wide target audience with its gold and diamond products designed for women, men and kids. The brand offers a selection of fashion jewelry that can be worn at any time of the day and appeal to different styles. Atasay is the award winning brand of Turkey. It has become the Lovemark, Superbrand, brand of the year and the most reputable brand in the jewelry sector and it reaffirms these titles every year. Moreover, Atasay managed to reach masses by making collaborations with names such as Meryem Uzerli, who has a large fan base both in Turkey and in the Middle East. As a supporter of strong women who are always improving, Atasay supported women’s empowerment with the campaign “Don’t Care Just Wear”.